Marginalized Populations Conference: Under the Gun 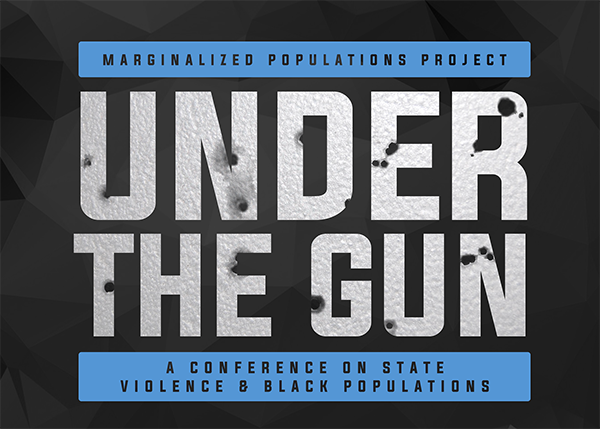 The Marginalized Populations Project, a collaborative research initiative designed to explore political dynamics between populations with unequal, minimal, or non-existent state protections and national governments, will host its inaugural conference, Under the Gun: State Violence and Black Populations, on October 19 and 20 at the Perry World House.

The highly publicized killings of Black and Brown men and women by police officers in the U.S. during the past several years has generated discussion worldwide about the ongoing legacies of racial discrimination in the U.S.

When combined with clear evidence of disproportionately higher incarceration and sentencing rates relative to other populations in the criminal justice system, residential and occupational segregation, and institutional racism, these killings would first appear to be attributable to, in the words of Nobel prize winner Gunnar Myrdal, the tension between formal declarations of equality and the ongoing reality of racial injustice which he refers to as the “American Dilemma.”

But, it’s not just the Black population in the U.S. that experiences this level of violence and incarceration. Afro-descendant populations in countries like France, Colombia, Jamaica, and Brazil have their own ongoing legacies of violence.

Under the Gun: State Violence and Black Populations will a provide an opportunity for activists and scholars to explore common and divergent strategies for lessening the effects of organized violence directed against marginalized populations in diverse societies.

Michael Hanchard, Professor of Africana Studies and Director of the Marginalized Populations Project, organized the conference. "The aim of this event is to put different actors, populations and institutions into conversation with one another in order to highlight the efforts of activists, policy-makers and academics. As a collective, we will address the myriad forms of collective violence experienced by Afro-descendant populations,"  says Hanchard.

The conference brings together internationally renowned scholars and social movement and political actors to examine the disproportionate experiences of Afro-descendant populations in France, Brazil, Jamaica, Colombia, and the U.S. with state, extra-judicial, and popular forms of organized violence.