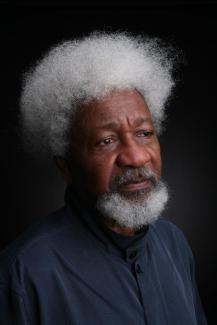 A Yoruba born in Western Nigeria and educated in Nigeria, continuing into Leeds University, England, Wole Soyinka was the first African to win the Nobel Prize for Literature - in 1986. He has authored over forty works in the medium of plays, novels, poetry, essays, and biographies, several of which have received world-wide translations as well as theatre performances. He is active on artistic, academic and Human Rights organisations such as the International Theatre Institute, UNESCO, the International Parliament of Writers etc. He is recipient of numerous academic and national honours, and holds traditional titles in his own country. Wole Soyinka continues to lecture extensively within Nigeria and internationally, and currently holds positions as EmeritusProfessor at Obafemi Awolowo University, Ile-Ife, Nigeria, Hutchins Fellow, Harvard University, USA, and Fellow of Churchill College, Cambridge, UK.

The Lion and the Jewel; Death and the King’s Horseman are among his most celebrated plays while his poems are collected in IDANRE; MANDELA’S EARTH and Other Poems; SAMARKAND and Other Markets I Have Known. His autobiographical worksencompassing childhood, youth and adult political and literary activities comprise: AKE, The Years of Childhood; IBADAN The Penkelemes Years; YOU MUST SET FORTH AT DAWN. His corpus of prose fiction – The Interpreters; Season of Anomie - was recently augmented by his latest novel - CHRONICLES from the Land of the Happiest People on Earth (BookCraft/Random House/Bloomsbury currently undergoing translations around the globe. His two-volume essay collection, OF POWER and FREEDOM, (Bookdcraft)  will be published in June, 2022

Copies of Chronicles from the Land of the Happiest People on Earth: A Novel  will be books will be on sale in Mosaic Hall.

Co-sponsored by Perry World House, Department of English, Program in Comparative Literature and the Penn Museum

If you can't attend in-person, you can join this hybrid event at the link below: